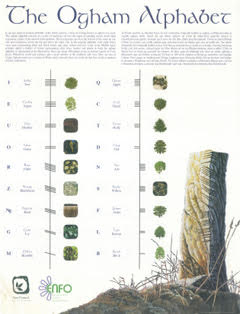 The Ogham script is the first alphabet of Europe, in which every letter is named for a tree or an important companion to trees. What is remarkable about Ogham is that the philosophy behind the language carries a way of thinking about the rebirth of the forest, namely, to consider how intimate the connection is between forests and humans. Legend says that when a young man named Ogma created the Ogham script, nature came calling, because all imagination – even scientific imagination – originates in nature. Young Ogma looked around his neighbourhood and his eye fell on the Druid’s sacred life forms – the ancient forests. So the alphabet of the forest was created. This new writing held the philosophy of the forest and of a millennia of oral culture that went with it.