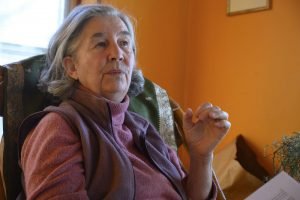 Diana Beresford-Kroeger is a world recognized author, medical biochemist, botanist and climate change visionary. She possesses a unique understanding of modern western science and ancient Celtic knowledge.  Orphaned in Ireland in her youth, Beresford-Kroeger was educated by her Irish elders who instructed her in the Brehon knowledge of plants and nature.

Told at a young age that one day she would need to bring this ancient Celtic knowledge to a troubled future, Beresford-Kroeger has done exactly that.

Diana has been working to preserve the environment since the early 1960s when she identified climate change as one of the most important challenges we would face in the modern age. This set her on a course of rigorous scientific study where she achieved a masters in botany and two PHD’s – one in biochemistry and the other in biology.  In 1967 she discovered genetic smearing, which changed the way scientists studied microcosms under a microscope.  Diana also discovered cathodoluminescense in biological systems, which is now used to detect cancer.  But because of her Celtic roots her heart was always with the forest.

Diana’s understanding of the ancient knowledge of trees has led her to unique scientific discoveries.  In the 1970s Diana started her own arboretum and collected trees from all over the world. She discovered the importance of mother trees at the heart of the forest and she scientifically proved that trees are a living library of medicine that have a chemical language and communicate in a quantum world.  She created an ambitious bioplan encouraging and educating ordinary people how to replant the global forest. This plan was adopted by the city of Ottawa.

Diana’s documentary, “Call of the Forest” was released in 2016 and alongside it was a tree-planting app “which keyed species to plant to the regions where people lived.”  Early on in filming, Diana was introduced to activist Sophia Rabliauskas, leader of the Poplar River First Nations. Sophia had secured protected status for two million acres of virgin boreal forest on the eastern side of Lake Winnipeg, and was currently fighting to have the entirety of Pimachiowin Aki, a massive area of virgin boreal forest, declared a UNESCO World Heritage Site. The women teamed up and when their first application was rejected, Diana journeyed into the forest to prove the importance of its biodiversity by identifying plants that exist nowhere else.  In August 2018, Pimachiowin Aki was named a UNESCO World Heritage and Cultural Site – the first to be recognized as having both cultural and environmental significance.

Diana’s legacy project is to clone and map the entire global forest. This process is similar to medicinal stem cell cloning where the DNA is preserved unchanged remaining in its native form.  A living bank of tree seeds must be put together to either mend or amend what remains of our global forests. Creating a living library of the global forests will preserve the forests for generations to come.

Any cookies that may not be particularly necessary for the website to function and is used specifically to collect user personal data via analytics, ads, other embedded contents are termed as non-necessary cookies. It is mandatory to procure user consent prior to running these cookies on your website.